Gold is Ethiopia’s main mineral export and has been mined since ancient times, primarily as alluvial or free gold. At present, Ethiopia has a single large-scale gold mine, Lega Dembi, in the southern area of the country, owned by Midroc (98%) and the Ethiopian government (2%). Another advanced project is located at Tulu Kapi, in the west central area of the country, owned by Nyota Minerals Limited. The IFC, a member of the Work Bank Group, has made a £3.4M investment in Nyota to help finance development of the property.

In addition to gold, Ethiopia has reserves of platinum, copper, potash, natural gas and hydropower. However, the mineral industry is not a significant sector of the economy, contributing less that 1% to GDP. On a global scale, Ethiopia is a significant producer of tantalum, producing 7% of the world’s supply in 2007. Other key minerals produced in Ethiopia include niobium, platinum, tantalite, cement, salt and gypsum, clay and shale, and soda ash.

During the 1990s the Ethiopian government revamped mining law and regulations and began upgrading infrastructure to support mining. In 1993 the Mining Proclamation and the Mining Tax Proclamation was put in place to provide for a legal regulatory framework to promote investment in mineral exploration and production in the country. These Proclamations were followed by additional amendment proclamations until 1996, marking a major shift from the government monopolized mining sector that existed prior to 1993. The proclamations allow for business incentives that include security of tenure, the right to sell minerals, preferential duty and tax provisions on equipment and machinery, a 5 to 8 % production royalty (revised in Proclamation 678/2010), a 35 % income tax on taxable income, and a structuring to allow for repatriation of profits.

Ethiopia – Located in the Horn of Africa

The Federal Democratic Republic of Ethiopia is located in northeast Africa, in the region termed the Horn of Africa.

Ethiopia has steadily improved in economic development since 2002. New mining regulations were issued in 1993 with the purpose of promoting exploration and development of Ethiopia’s natural resources. Ethiopia is viewed as a country with underdeveloped hydrocarbon and mineral wealth. Opportunity for future economic development is envisaged as a potential significant economic driver for the country. To that end, the World Bank reports that Ethiopia’s economy has experienced strong, broad-based growth averaging 10.3% a year from 2006/07 to 2016/17, compared to a much lower regional average of 5.4%.

The country is landlocked and is topographically comprised predominantly of high plateau. The population is diverse in terms of spoken languages and religions, with a Christian majority coexisting with a one-third Muslim population.

One of three Harvest Projects, the Terakimti is a 70% owned volcanogenic massive sulphide (VMS) project located in the southern part of the Arabian Nubian Shield (ANS) in the Tigray region of northern Ethiopia. The Terakimti deposit has defined 114,000 ozs of gold Indicated and 1,000 ozs of gold Inferred in a surface oxide layer. The oxide portion of the deposit is covered by a Mining Licence granted from the Ethiopian Ministry of Mines, Petroleum, and Natural Gas (MoMPNG). Potential exists to develop supergene gold, copper, and primary sulphide copper, gold, and zinc resources underlying the gold oxide zone.

In April 2018, a Preliminary Economic Assessment (PEA) was completed on the Terakimti oxide zone, indicating very strong project economics, including a post-tax NPV of US$13.2 million (8% discount rate), and an IRR of 30.1%.

East Africa Metals’ Harvest Project is 600 kilometres north of Ethiopia’s capital of Addis Ababa. It’s located in the highly prospective Asmara Mineral Belt in the southern part of the Arabian Nubian Shield (ANS). The Debarwa and Emba Derho volcanogenic massive sulphide (VMS) discoveries in Eritrea and SE of the Bisha deposit are 90 to 140 kilometres southwest. Bisha is now a producing gold-copper-zinc-silver mine with over 25 million tonnes at 1% copper and 0.7 grams per tonne gold of ore in reserves. Vein-related gold deposits are also typical of the ANS, including the giant >13 million ounce Sukari deposit in Egypt, the one million ounce gold discovery at Koka-Zara in central Eritrea and the 140,000 ounce per year gold producer at Lega Dembi in southern Ethiopia.

East Africa Metals acquired its interest in the Harvest Project through its acquisition of Tigray Resources in 2014. Tigray acquired a 70% interest in the project in 2011 through a joint venture with Ezana Mining Development, a private Ethiopian company. Harvest comprises three contiguous exploration concessions covering approximately 86 km2 , including Terakimti, Igub, and Hamlo (as at January 10, 2017). EAM, through its Ethiopian subsidiary company Harvest Mining PLC, has received a mining licence for the Terakimti Gold Heap Leach Project.

The Harvest Project contains multiple trends of copper-gold-silver-zinc rich VMS systems and numerous artisanal bedrock gold workings on its three exploration licences. Until recently, the ground has not been subject to modern exploration. Exploration by Tigray in 2011-2013 has included drilling 84 diamond drill holes testing four prospects for a total of 17,765 metres, a heli-borne VTEM, magnetic and radiometric survey, ground gravity and electromagnetic (EM) surveys, over 90,000 surface soil, stream and rock chip samples, and regional to detailed geological mapping. State of the art technologies, including a Niton handheld XRF unit used for real-time base metal assay of drill core and surface geochemical samples, has allowed exploration to advance at a rapid rate.

The most advanced prospect on the Harvest Project is Terakimti, where over 70 diamond drill holes have been completed, with peak results of 73.80 metres of 3.80% copper, 1.30 grams per tonne gold and 14 grams per tonne silver, including 36.45 metres of 6.01% copper, 1.69 grams per tonne gold, 19 grams per tonne silver and 1.31% zinc in hole TD004. Significant base and precious metal mineralization has been intersected in the majority of drill holes completed. An initial 43-101 compliant mineral resource estimate was announced in January 2014 (details are provided below), and an updated oxide mineral resource estimate was announced on October 27, 2015. On August 11, 2016, EAM filed a mine permit application for the Terakimti oxide with the Ministry of Mines, Petroleum, and Natural Gas (MoMPNG), as well as applying for additional rights to related exploration targets on the Harvest ground. On December 6, 2017, the mine permit for the Terakimti Oxide Gold Project was granted.

The Adyabo Project Mato Bula and Da Tambuk deposits are high sulphidation gold rich VMS. This submarine porphyry-related system is located in the southern part of the Arabian-Nubian Shield (ANS) in the Tigray region of northern Ethiopia. Mining licences have been received that cover both deposits on Adyabo, Mato Bula Au-Cu-Ag and Da Tambuk Au.

Tibet Huayu Mining Co. Limited (“THM”) is be responsible for 100% financing of both Adyabo’s Mato Bula and Da Tambuk mine construction costs resulting in a 70% THM and 30% EAM ownership.

The original Adyabo project (Adi Dairo and West Shire concessions) covers 195.5 km2 west of East Africa Metals’ Harvest Project and is located in an under explored part of the Arabian-Nubian Shield in Northern Ethiopia. East Africa Metals acquired its interest in the Adyabo Project through its acquisition of Tigray Resources Inc. in 2014. In December 2011 Tigray entered into an agreement to acquire up to an undivided 80% interest in the Adyabo property in two phases over a three-year period. In November 2012, Tigray received TSX Venture Exchange approval for the acquisition of the Adyabo property in Ethiopia and advanced the first phase of the earn-in. In February 2016, East Africa Metals originally obtained 100% interest in Adyabo by converting the remaining 20% ownership to a 2% NSR. The area is highly prospective for high sulphidation gold rich volcanogenic massive sulfide (VMS) – submarine porphyry related high-grade Au-Cu +/- Zn, and orogenic (structurally controlled) gold deposits, and contains numerous alluvial, eluvial, and bedrock artisanal gold workings.

The project area includes several major linear NNE trending shear zones which truncate rocks of the Zager Mafic and Ultramafic Belt in the centre of the project area, with the Adi Hageray Block to the west and the Adi Nebrid Block to the east. Known high sulphidation gold rich VMS – submarine porphyry related high-grade Au-Cu +/- Zn related mineralization in the east of the project includes the Mato Bula and Da Tambuk Prospects, and multiple gold prospects are present along the regional structures of the Zager Mafic and Ultramafic Belt. Multiple generations of intrusions throughout the project include gabbro, pyroxenite, granite, and granodiorite.

Recent work has been focussed on defining drill targets through follow-up and first pass exploration. Over 50,000 geochemical soil, stream, and rock chip samples have been completed, defining numerous gold and base metal anomalies. These anomalies have been followed-up with trenching, rock chip sampling, detailed mapping, and logistical preparation for drilling. 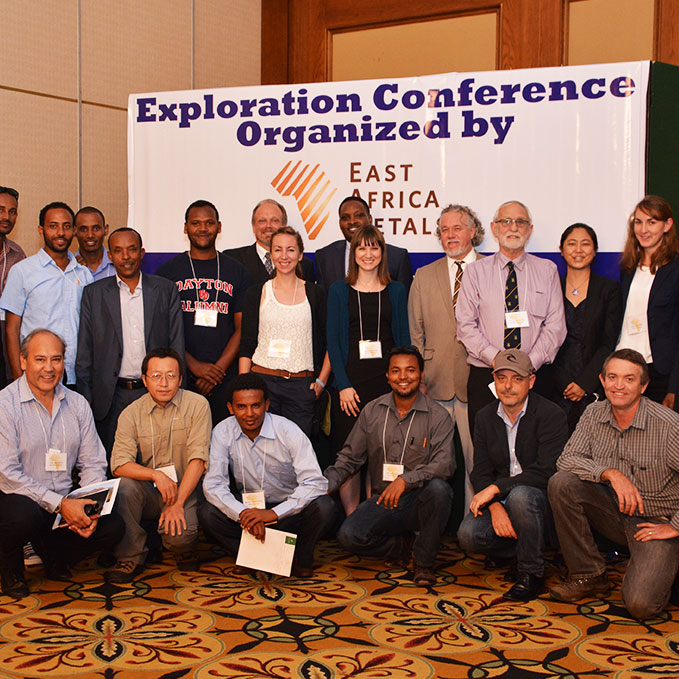 East Africa Metals was instrumental in starting the first Ethiopian International Mining Conference & Exhibition in 2017. The conference provides opportunities to inform stakeholders of the Ethiopian reforms to facilitate investment in the mining sector. It helps identify innovative financing solutions applicable to both large and small-scale mining projects and services; and improve both the quality and access to data relating to Ethiopia’s geological infrastructure.

As one of the sponsors, the Ministry of Mines & Petroleum in Ethiopia is responsible for promoting the development of mining and issuing licenses for exploration and mining operations. The ministry ensures that companies conduct mining operations and meet financial obligations in accordance with their concession agreements. The ministry also ensures the proper collection, maintenance and accessibility to users of data on minerals; and helps organise, research and training centres that may assist the enhancement of the development of mining in Ethiopia.