Gold was discovered by locals in the Magambazi area in 2003, spurring a gold rush with intense alluvial and hard rock mining. Canaco acquired the Handeni property in 2007 and began drilling at Magambazi in 2009. The first hole proved to be the discovery hole, returning 53 metres grading 4.32 grams per tonne gold. Further drilling in 2010 was carried out over much of the approximately 960 metre strike length of the Magambazi hill. In 2010, mineral resource drilling was initiated on section lines that were spaced 40 metres apart to define the extent and quality of the observed gold mineralisation. By April 2012, 471 diamond drill holes had been drilled for a total of 121,846 metres on the Handeni property, of which 442 holes totalling 113,692 metres were related to resource definition on Magambazi hill. Findings from approximately 400 of these holes were used as the basis for the initial mineral resource estimate announced on May 15, 2012. The remaining holes were released on July 20, 2012, and are not expected to significantly affect the mineral resource estimate.

Situated in the Paleoproterozoic Usugaran/Ubendian Metamorphic Terrane, and along the northern extension of the north-trending Proterozoic Mozambique Mobile Belt, the Handeni area hosts the metamorphosed eastern extension of the Lake Victoria cratonic belt and as such is considered prospective for Archean greenstone-related orogenic lode-gold mineralization and deposits. The geology of the Handeni area is characterized by variably deformed amphibolite facies para- and ortho-gneisses, and amphibolites, with evidence for thrust faulting and the later development of a northwest trending mineralized shear zone in the northeastern portion of the property.

Gold deposits on the Handeni property consist of artisanal placer deposits and orogenic vein-related mineralization in altered amphibolite gneiss. The host assemblage is interpreted to represent an original metamorphosed Archean lode-gold terrane (predominately mafic volcanic and mafic volcaniclastic rocks) that has been entrained within the Proterozoic Usugaran belt, and undergone further alteration/metamorphism during the Proterozoic Eon. A prominent east-northeast trending thrust cuts across the northern portion of the property. Additionally, mineralization in Lake Victoria is also concentrated along northwest-trending faults. Both of these features are present in the Magambazi area. Many of the significant gold deposits of the Lake Victoria area are spatially associated with iron formation; however, this relationship has not currently been noted in the Handeni area.

At Handeni, artisanal alluvial placer deposits are located at Magambazi, Magambazi North, Kwadijava South, Kwadijava, and Majiri. At Magambazi, Magambazi North, and Kwadijava, artisanal workings occur in quartz-vein-related gold, with mineralization located within silica and garnet altered amphibolite gneiss. Garnet in these altered sections is generally fine grained (<2 millimetres) and the altered zones typically display only a vague banding texture as compared to associated gneisses. The depth extent of these mineralized systems has been confirmed by diamond drilling.

A cut-off grade of 0.5 grams per tonne was selected as the resource base case, considering extraction by conventional surface mining and mineral processing methods. A summary of the estimated mineral resource for a range of cut-off grades was included, as follows:

The mineral resource estimate was prepared in accordance with the Canadian Institute of Mining, Metallurgy and Petroleum (CIM) Standards on Mineral Resources and Mineral Reserves, adopted by CIM Council, as amended. The mineral resource estimate was prepared by independent qualified person, Mr. James N. Gray, P.Geo., of Advantage Geoservices Ltd. In support of this work, drilling data validation and historical context was provided by independent qualified persons Mr. Ian Farrelly, P.Geo. and Dr. Sandy Archibald, P.Geo. of Aurum Exploration Services. Mr. Gray, Mr. Farrelly and Dr. Archibald are each independent of Canaco and are Qualified Persons as defined by National Instrument 43-101. Each reviewed, validated and approved publication of the technical information contained in the May 15, 2012 news release.

Gold grades were estimated by inverse distance cubed interpolation within two grade domains. Low-grade and potentially mineralized domains were derived by ordinary kriging of a 0.2 gram per tonne indicator applied to five metre composite data. Composite grades were capped in the two domains at 2.5 and 15 grams per tonne respectively. The interpolation of indicators and of grade was carried out with a search oriented parallel to one of five interpreted structural trends. Rock densities were based on averages derived from more than 50,000 measurements. Resource classification was based on geometric parameters associated with sample location and drill density.

Measures were taken to validate that the mineral resource meets the condition of “reasonable prospects of economic extraction” as suggested under National Instrument 43-101. To this end, a pit shell was generated using a gold price of US$1,250 per ounce and an overall pit slope of 40° for the purpose of resource tabulation. Only blocks within the pit volume were included in the resource estimate. The cut-off grade of 0.5 grams per tonne was selected as the resource base case considering extraction by conventional surface mining and mineral processing methods.

In parallel with the initial mineral resource estimate, Canaco completed a comprehensive metallurgical test work program that concluded mineralization from the Magambazi area of the Handeni property may be processed using conventional gravity concentration and cyanide leaching to recover the contained gold. Gravity concentration installed in the grinding circuit is expected to recover approximately 70% of the gold in the plant feed into a gravity rougher concentrate representing approximately 2% of the mass feed.

A variety of tests were conducted on representative composite samples to determine the metallurgical response and its variability across the zones. An extensive sampling program was undertaken to generate composite samples that would be representative of the Magambazi mineralization as a whole and each zone in particular. Approximately 3,000 individual drill core intervals were selected as constituents for metallurgical test work composites, representing 2,325 metres of drill core. To maintain security and integrity of metallurgical samples, each drill core interval was kept segregated and shipped as an intact section of quartered core material to the metallurgical laboratory for processing.

Easy Access to the Property
The Handeni property is accessible through a network of public roadways in the area. Road access to the site is available from two unpaved public roads, with paved highways extending to within 20 kms of the site. Driving times to the property are approximately five hours from Dar es Salaam and three hours from Tanga. Air access to the site is available via scheduled or chartered fixed wing flights to the paved runway at Tanga. Helicopter charters are available from Dar es Salaam to a prepared landing area at the village of Madebe, with the flight taking 45 minutes.

Modern Infrastructure
The Canaco Tanzania field camp consists of a combination of temporary and semi-permanent structures. These include tented modular sleeping quarters, a fully equipped field office, a canteen, several open sided sheds for sample processing (e.g., core sawing), and two sealed containers for storage of unused assay pulps returned from the assay laboratories. Power to the camp is provided by a diesel generator and communication links are provided by mobile phone and a satellite-based broadband connection.

Access to Labour
Local labour is plentiful in the area. Most of the technically qualified staff is sourced from the universities of Dodoma, Dar es Salaam and Mwanza. Contract staff from North America, Europe, and Australia is frequently brought to the project to provide further assistance.

To view the EAM technical reports, click on the links below: 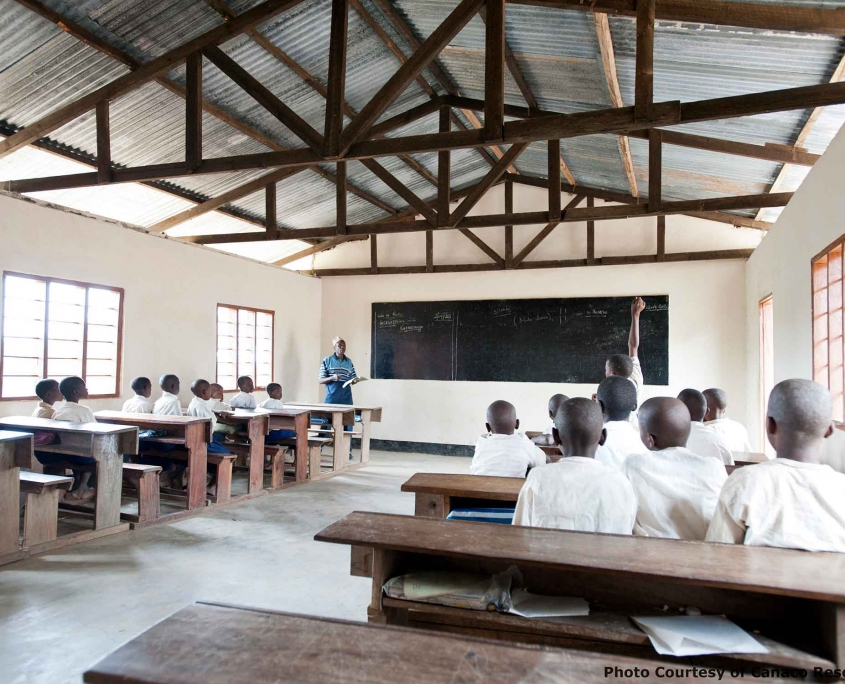 Improving education for the local community.

A focus on education by building a school

EAM financed the building of a school for their local Tanzanian community.